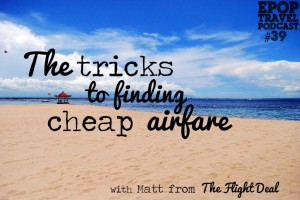 EPoP 039: The Tricks to Finding Cheap Airfare with Matt from the Flight Deal